What does "Anemolia" mean?
The name Anemolia was first mentioned by the ancient poet Homer having various meanings such as "light" words, words spoken easily without being meant, words gone with the wind, words never meant to be written.
One could say that it's like words being whispered between lovers in their intimate moments, carried away by their passion and remain only between them without ever been heard by anyone else.

Note: Our sailing yacht "ANEMOLIA" scheduled to be sailing on the area of Sporades Islands in the year 2013,may differ in some points with the yacht described on the photographs below. 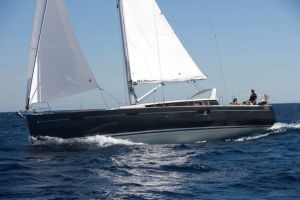 Our yacht Beneteau Sense 50' "ANEMOLIA" constructed in 2013, features design innovations with emphasis on pleasure and comfort in navigation as well as in everyday living onboard habits. This specific yacht model has already been awarded with two prizes for the best sailing vessel for the category for up to 15,5 meters and has also been nominated for the prize of "Luxury pleasure yacht" for the year 2011-2012. 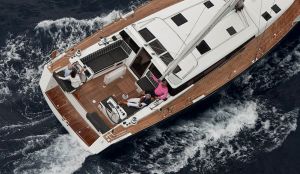 ne of its main characteristics is its spacious layout of the stern area offering comfort in the outdoor living-room, enhanced with two foldable cockpit seats, thus providing easier access when entering the yacht, by sea or from the pier. 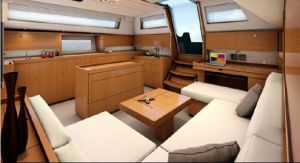 The natural and artificial lighting In the interior of the vessel, gives a unique feeling of spaciousness. The large openings are in such a way carefully designed to both enhance the brightness of the area as well as the recycling of the air despite the wind's direction. Stern cabins do not exist since the entire interior area is developed towards the front section of the yacht. Both the living-room and the kitchen are located in the central area. The yacht is also equipped with a large flat TV Screen LCD, DVD, DVB-T, CD, MP3 and Radio. 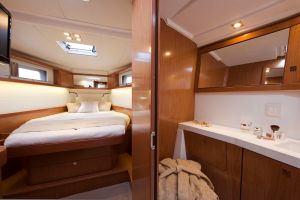 This luxurious vessel is designed in such a way in order to allow to the passengers to maintain, as far as possible, their autonomy and freedom of movement, since in the interior of the yacht there are also two very spacious and comfortable cabins with their exclusive bathrooms, where the shower has its separate autonomous space and there is also a cabin for the skipper, while the yacht's layout is completed with an additional cabin with two separate beds. 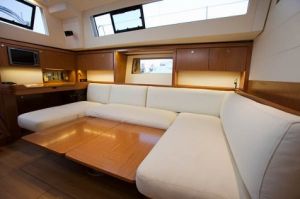 Both in the interior of the yacht as well as in the outdoor one can easily encounter flexible convertible modular, which can transform the uses of the area, such as the sofas on the outdoor living room which can be easily transformed into sun mattresses, while in the interior living room the beds are capable of accommodating two additional people. 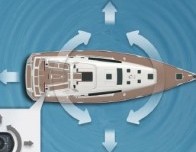 Our new yacht (construction year 2013) "ANEMOLIA" features a new innovative navigation system, the so-called "Dock and Go", which simplifies the dock process since it offers the ability of the vessel to rotate around its axis by 360 degrees, while its handling is particularly simple, since it occurs by simply using a joystick.